Over a Million Dollars Reduced to Pennies!

TaxRise reduces a million dollar IRS debt by over 99.99% and completely eliminates a $6,000 state liability.

San Diego, California – Caesar Farrell never dreamed that he would be a victim of IRS collections, let alone owe over a million dollars in tax debt.

As an NYU Engineering graduate, Caesar saw an opportunity to grow his career in real estate. Throughout the early 2000s, he invested in residential property across the United States until the 2008 housing bubble burst and sent his finances into a tailspin.

“I lost just about everything I had. So, I had to return those properties to the bank,” Caesar explained to us.

That’s when Caesar’s IRS troubles began. That year, Caesar’s tax bill came to just over $90,000, which Caesar had no way of paying.

“When you owe the IRS, and you don’t pay on time, there’s such a thing known as fees and late taxes. And they add up every month. Every month it would accumulate and it got over a million dollars.”

The IRS took drastic action to collect Caesar’s tax debt. They garnished his paychecks and confiscated his bank account, leaving him with nothing.

Caesar was contacted by a tax relief company who claimed that they would eliminate his debt.

Desperate for help, Caesar signed up for their services only to be scammed out of thousands of dollars.

At a loss, Caesar decided to take the matter into his own hands. “I stayed up nights, and I looked for all the information I could possibly gather to get me away from this. Because I know the IRS, they don’t stop. They just keep going and going and going. I had to find a way to stop them from doing this.”

That’s when Caesar reached out to TaxRise.

After his previous experiences, Caesar was understandably wary of trusting another tax relief company, but he knew he needed professional assistance. So, he scheduled a free tax consultation with TaxRise.

“I told them, ‘I have a problem. And this is what my problem is. I don’t want to invest any more money into your business if I’m not going to get some results. Because I know what it’s like. You’re not going to be able to fool me.’ I knew what I was looking for and I know what I wanted.”

But, TaxRise knew that major relief was possible. TaxRise accepted the case and immediately got to work on preparing his settlement offer.

"Whenever you have such a high liability, the IRS will do whatever it can to collect as much as it can."

“With Mr. Farrell’s case we had to take somewhat of a unique approach,” said TaxRise Senior Tax Attorney, Satyam Mehta. “Because it was such high liability, the offer unit of the IRS heavily scrutinized everything that we provided.”

Although Caesar owed over a million dollars in tax debt, TaxRise was able to build his case around the financial hardship that he’s faced since the 2008 economic crisis.

However, Caesar’s tax trouble did not end with the IRS.

Mr. Farrell also owed the state of California just over $8,000. Compared to the million dollars he owed to the IRS, his state liability appeared to be minuscule, but the state was much less willing to negotiate.

“The [California] assigned agent was very difficult,” shared State Tax Resolution Officer Violet Rivera. “He wanted us to file returns for 2000, 2001 because that would cause a bigger liability of around $40,000.”

Taxpayers are under no obligation to file tax returns for tax years after the collection statute expiration date, so Violet and her team fought back.

"After the accepted offer, we completely wiped out his balance for the state of California."

Caesar’s state liability took months longer to negotiate than his federal debt. While the process was tedious at times, the TaxRise team remained persistent.

But that wasn’t all for Caesar. A few months later, California conceded to our negotiations and completely eliminated his state liability.

“I didn’t pay anything. Not a dime,” Caesar happily announced. 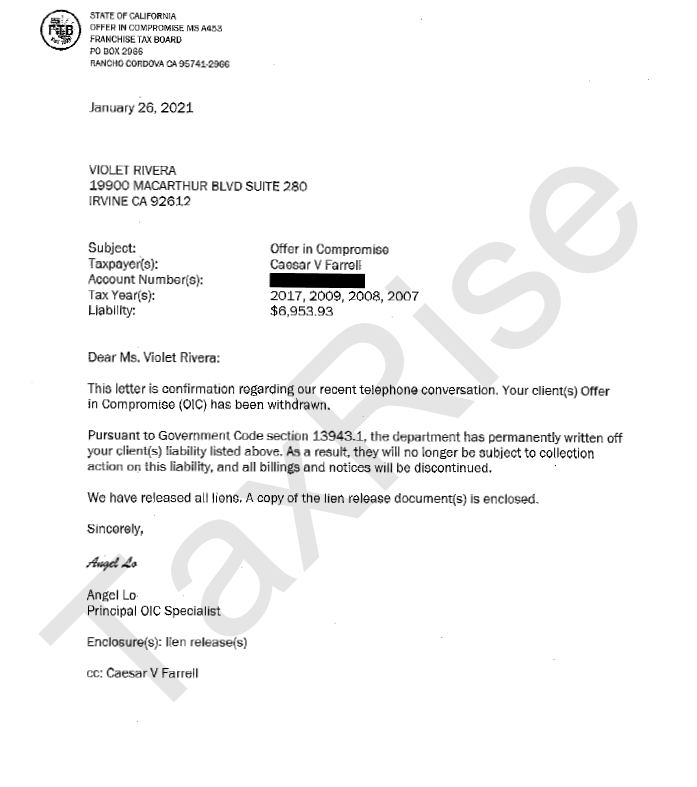 * Caesar Farrell is a real TaxRise client and agreed to be interviewed regarding his experience.