Alice Kellogg* of Jackson Mississippi retired in 2015. Even before she retired, Alice had a history with the IRS and the State; they had garnished her wages before and were always at the back of her mind.

In 2016, Alice noticed that she had been feeling perpetually unwell and experiencing pain in her chest. After multiple doctor visits and examinations, she was diagnosed with breast cancer.

Being retired, she had to rely on her health insurance to cover the surgery and other medical expenses.

However, Alice’s health insurance only covered up until 2017, and, with her previous years of unpaid and unfiled taxes, she accumulated a sizeable liability of $6,833.

To make matters worse, the IRS garnished her social security insurance and the State issued a bank levy against her.

With only her SSI as a means of income, Alice had two of the most powerful financial entities in the country coming after her.

Once we got Alice’s case, we immediately wanted to release her from the garnishment on her SSI. Additionally, the TaxRise team knew that we could use her medical history as a means of negotiation with the IRS.

The first step in our tax resolution process was to understand Alice’s financial past. Alice owed both the State and Federal government taxes dating back to 2008, along with four years of unfiled taxes.

Alice was making efforts to rectify her debts, but her medical expenses were what disrupted her plans.

TaxRise built the best case possible to free Alice of her garnishment and tax liability.

While the tax professionals at TaxRise built a case to win Alice an offer in compromise, she stressed to us her desire to be released from her bank levy.

Alice’s Case Manager (all of our clients get an assigned team with unique roles) explained to her that we were not representing her with the State, but the IRS. Nonetheless, Alice’s team called and gave her a strategy with several questions she could use when she spoke with the State.

Finally, TaxRise presented Alice’s case before the IRS representative. We negotiated and emerged with an offer in compromise to reduce Alice’s tax debt of $6,833 to $100. Furthermore, Alice was released from the garnishment and the State’s bank levy.

Alice’s situation improved tremendously. The garnishment on her SSI was removed along with the bank levy that had been issued by the State. 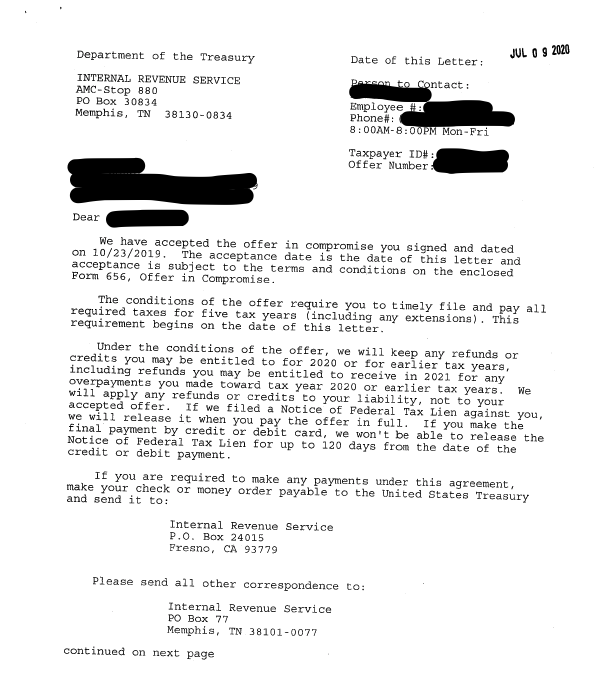