Huntington Beach, CA – Gregor’s wages were being garnished until he came to TaxRise.

Gregor Whitehall* started a business back in 2008. Gregor was a great manager, but he wasn’t as knowledgeable on the financial side of operating a business. Shortly after starting his small business, Gregor needed to have open heart surgery – most likely induced by the stress.

Ultimately, Gregor had to close down all production and let go of all of his employees. In retrospect, he felt that his partner hadn’t given him enough information and insight in regards to running a small business. Since then, he has still been experiencing the ripples of that terminated venture.

Gregor's small business failed in 2008. This led to an enormous accumulated liability, which the IRS was determined to collect.

Due to his failed business venture, Gregor had unpaid taxes dating back to 2008 and a massive accumulated liability. Eventually, the IRS sent him a letter informing him that they would soon begin wage garnishment.

A wage garnishment is a court-ordered instruction that mandates your employer to withhold a specific amount of your paycheck and have it sent to your debtors until the liability is paid in full.

Since Gregor’s liability was $178,065.65, a wage garnishment would be disastrous on his finances.

First and foremost, the tax professionals at TaxRise got to work on resolving Gregor’s wage garnishment. They set up a strategic, temporary installment agreement to momentarily halt the effects of the wage garnishment until an offer in compromise could be established.

TaxRise set up a temporary installment agreement, which momentarily halted the effects of Gregor's wage garnishment. After that, we got to work on his tax liability.

Not too long after TaxRise’s debt relief process commenced, Gregor’s father passed away. We offered our deepest condolences to Gregor, but another tragedy would befall our client soon after when he severely injured his foot.

Mourning, out of work, and in rehab, Gregor was in no shape to be dealing with the IRS. The TaxRise team took it upon themselves to not accept failure as an option. We would resolve Gregor’s tax liability and release him of his wage garnishment.

The tax professionals at TaxRise built a strong case and presented an OIC of $500 to the IRS. The IRS did not accept. They instead countered the $500 offer we made with $6,372, which was higher than we would have liked but significantly less than the original liability.

TaxRise presented Gregor with the newly proposed payment. Gregor accepted the new OIC, and TaxRise was able to settle his tax liability of $178,065.65 for $6,372. 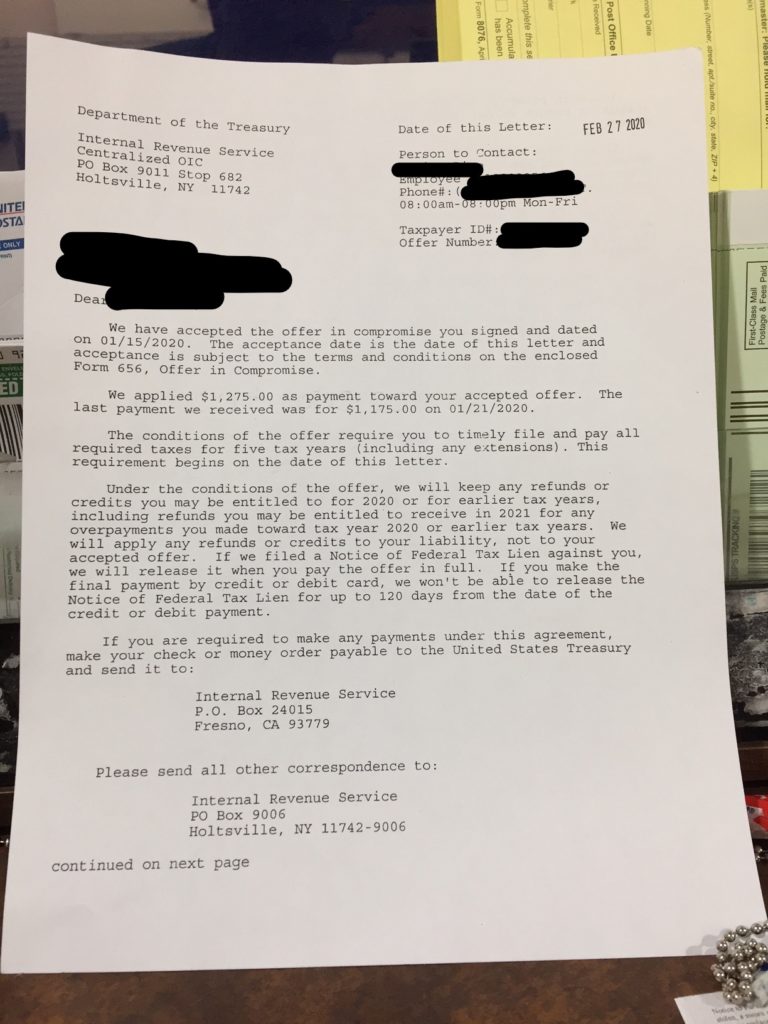