South Carolina – With the expertise of TaxRise, Randy, a fence installer, managed to reduce his wage garnishment from 25 to 10% and settle his $75,000 debt for $798.

Randy James* is the only wage earner for his household of five children and his fiancé. He lives with his family in South Carolina and works as a fence installer.

Randy's wages were being garnished for 25%.

Randy hadn’t filed or paid his taxes for several years. He also had a unique living situation; Randy owned the land that he lived on but did not own the home he resided in. Additionally, he paid $160 a month in child support.

All of these factors built up Randy’s tax debt until it reached $75,000. At this time, the IRS had begun garnishing Randy’s wages by 25%, and they were sending letters demanding he pay his taxes.

When TaxRise received Randy’s case, there was a lot of bad work that needed to be undone.

For example, another company had recommended that Randy list his fiancé as his spouse so that he could use her dependents on his tax return. Put bluntly, this was shady advice, which we had to fix.

Moreover, Randy was suffering tremendously from the wage garnishment. He was already making payments on his house plus child’s support; he barely had enough to support the five children under his roof.

TaxRise got his garnishment down from 25% to 10%. Then, we worked to reduce his total debt.

TaxRise was not able to get his wage garnishment released in full. However, after much discussion with the IRS, we were able to whittle it down from 25% to 10%. The IRS also agreed that they would release Randy of his garnishment when his debt was paid in full.

There was no feasible way Randy could pay back $75,000. So, we sought to obtain an offer in compromise. To do this, we needed to get Randy current on his taxes by filing all of his past years of unfiled taxes.

Next, we complied documentation (his land status, proof of child support, etc.) demonstrating Randy’s inability to pay $75,000. After another round of negotiations with the IRS, our experts emerged on top.

Although the tax relief process began in 2018, our experts persisted, and in November of 2020, Randy’s wage garnishment was lifted and his $75,000 tax debt was resolved for $798. His offer in compromise settled his tax debt for 1% – saving over 99%. 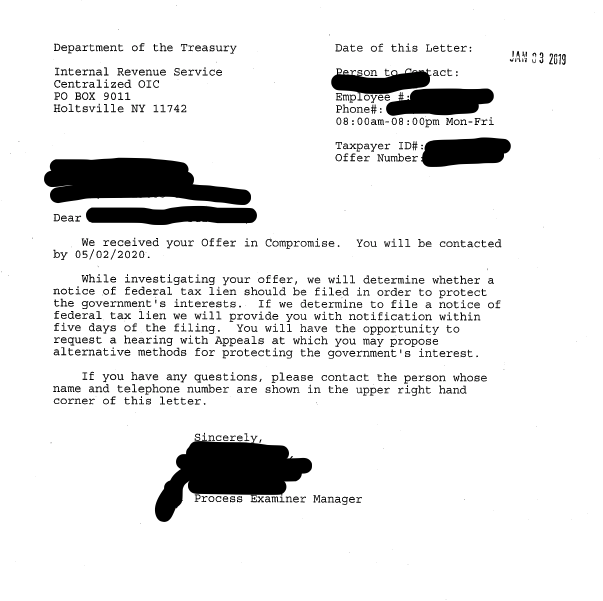